Still a lot going on, here. Penny and Diana are arguing about Diana’s bad habits (the mythical Diana/Artemis did the same thing…a lot. Look it up). Steve is recognizing Phil (which comes up later), and other things.

There’s important information here that I couldn’t really place. Penny works as an administrator for her father’s private detective agency, which also has a sideline of solving problems related to the supernatural and, in particular, the loose group of immortals known as the Old Crowd. Every time Diana has one of her snits, she makes a phone call and Penny has a lot of work to do making irritations go away, especially since Diana’s snits usually result in someone dying ironically (Acteon was eaten by his own dogs).

The Dubuque incident went down like this: Diana was waiting to meet a client in a bar (she’s a sports agent) when a guy approached her seeking directions to the bathroom. She turned him into a sheep (he was wearing a wool suit), and refused to turn him back because, “He probably saw my cleavage.” (She was wearing a scoop-necked t-shirt, so pretty much everyone in Dubuque had seen her cleavage by then.)

Anyway, the upshot was that the guy was coincidentally emotionally and physically abusive, so his wife wasn’t too heart-broken over his “fatal traffic accident.” His kids got to go to college on the “insurance settlement,” and the guy himself got to enjoy an early retirement on a farm in Upstate New York, where he provided wool for the Brooks Brothers corporation until his death from more or less natural causes in 1974. He was committed to eternity with some baby potatoes and a nice mint jelly.

Now that the Epiphany has officially marked the end of the Christmas Season, I can freely discuss my own beliefs without crapping all over someone else’s holiday. So, in answer to those few people who ask what I celebrate in the middle of December, I celebrate Christmas, because, why not?

There was probably some big party that related in one way or another to the Winter Solstice; every northern culture has one, but the fragments that have survived don’t mention its name or significance. Yule, for you Wiccans out there, is a Germanic holiday. 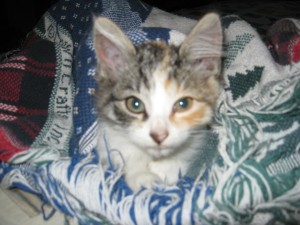 There’s Kittenalia, but I’m pretty sure that’s just a dodge to get extra treats.

So I celebrate Christmas, because I live in a culture where the party during the winter solstice is called Christmas, even though the person who’s birth it celebrates was undoubtedly born in early spring. Do I worship Jesus at that time? No, but I don’t care who does. It’s none of my business if someone wants to say December 25 is his god’s birthday. To me, the important thing is a day to see my family and enjoy their presence.

To me, Yeshua bin Miriam was (if reports of him are accurate) an astoundingly advanced philosopher with some great ideas about how to treat each other, but he isn’t my god. He’s my family’s god, so, as long as he continues to allow me to celebrate the shortest days of the year with them, I’m cool with that.

I’m cool with any holiday that gives me an excuse to draw my family together and tell them how much I love them, because everything can change in an instant. Refusing the opportunity to be with our loved ones over personal details of faith is stupid. 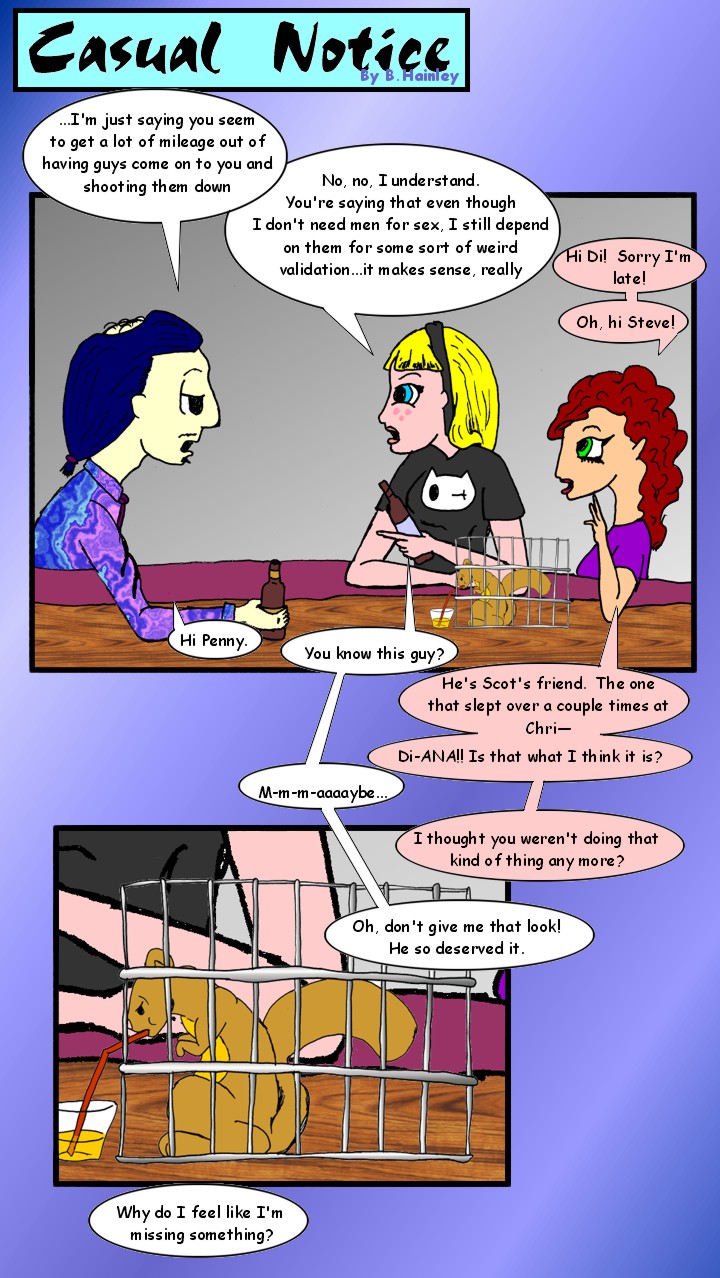 This comic is a disappointment to me on a variety of levels. For one thing, straight, parallel lines have always been my bane, so that cage looks like it was the ball in a pick-up game of soccer. Secondly, I’m not in love with the way I drew Penny, here. But, mostly, I tried to cram too many concepts into a three-panel comic.

You can see in the dialog that I’m juggling the end of Steve’s conversation with Diana, the fact that Penny and Steve are already acquainted, and Diana’s bad habit of transforming people into easily murdered other things.

Purely as a public service, and not at all to get them out of my head, I am posting a series of one- or two-line ideas I’ve had, but haven’t been able to process into something workable. Hopefully, others will find a way to expand them.

I overheard a couple of guys in a bar talking about the sorry state of the SEC. I agreed, but pointed out that’s what happens when your corps of regulators are allowed to be too closely tied to the regulated class. They looked at me like I was insane. Turns out they were talking about football.

If the best (or worst) thing you have to say about your day is that you’re clean and awake, you’re still doing okay.

I often wonder if, 500 years from now, high school English students will be forced to plow through old Two and a Half Men scripts like modern students have to study Twelfth Night.

The Porkpie, Seersucker, and Fedora are all really the same hat with a slight variation in the size of the brim.

I wonder if there’s any significance to the fact that Edward Hermann, Donna Dixon, and Mario Cuomo all died in the same week. I’m sure a brilliant conspiracy theory could be formed on it, possibly something involving manufactured connections and the Kentucky Mafia.

A surprising number of movies get bashed for being bad when they’re really just “not as good as we wanted them to be.” Except X-Men 3. It was awful, and its plot would have made more sense if Rattnor had just watched his kid play with action figures and transcribed that.

Sometimes I look angry or upset and people ask me what’s wrong. I really don’t know what to tell them. Because the only thing actually in my head is something along the lines of, “I really like pie.”

There you go guys. Eight brilliant ideas just begging for a better writer than me to flesh them out into something worth reading.