Although I’m personally very vocal about my dislike and distrust of the Affordable Care Act, I don’t think I’ve ever come out and stated my reasons for it.  The first, I have to admit, is resentment over how the nearly-one-thousand-page bill was passed through congress and shoved down Americans throats.  If you don’t remember, the first version was drafted within the first three months of Obama’s Presidency, with heavy input from pharmaceutical and hospital companies.  Then, for nearly two years, our congressmen and senators spent almost every waking moment telling us to roll over and take it, evading questions about what it really meant (they didn’t know, none of them read it), and assuring us that it was not—well, they assured us it was not a lot of things without actually telling us what it was; they were a lot like Muslims trying to describe God.  Finally, they passed the bill in an eleventh-hour session in 2010, just before a solid percentage of those who championed the bill found themselves out of work.  They had to cut deals with a Republican Senator to get the watershed vote, despite the Democrats holding a supermajority in the Senate (that’s right—all the talk about Republican obstructionism ignores the fact that at least one-fifth of Senate Democrats had listened to their constituents and voted against the bill).

So, yeah, I have an issue with that.  It seems like they took all their lawmaking lessons from the corrupt Senators in Mr Smith Goes to Washington.  But that isn’t the only reason I have issues.  I have deep personal issues with the individual mandate.  Forcing Americans to purchase a personal product has always been a problem for me.  Forcing Americans to invest in a financial instrument is beyond concerning to me, and make no mistake, insurance is a financial instrument.  In its purest form, insurance is a limited savings account that allows people to save money toward a crisis or an eventuality.  In its modern form, insurance is a lottery, a deadpool where you throw money and hope to god you never come up a winner, because winning that bet means something horrible has happened.  It’s no accident that prior to the ACA, the only form of insurance required by law in the United States was automotive liability insurance.  You have to have proof of your ability and willingness to meet your responsibilities if you accidentally cause harm to another person.  That is a reasonable requirement.  It is not reasonable to require people to pay into a money pool that really makes the problem worse.

Because lack of insurance has never been the problem with medical care in the United States.  Until very recently, all but catastrophic and chronic medical care were reasonably priced.  In fact you can track the insane inflation in medical treatment and tie it to the spread of insurance.  It’s a simple fact of economics: the more available something is, the less value it has.  Insurance made money for medical treatments ubiquitous, and thus, nearly valueless to the point that even minor treatments demanded huge sums.

And therein lies the actual problem with America’s medical industry, the problem that the ACA doesn’t even pretend to address.  The industry is awash in rampant inflation, monopolistic practices, and unregulated billing procedures.  Pharmaceutical companies blame the high price of medications on research and development, but they fail to mention that the “development” part of that phrase is mostly multi-billion dollar ad campaigns designed to convince the credulous that they have a condition that can be treated by the company’s designer drug.

Anyone who’s ever had to visit a hospital in the past ten years can tell you that their billing practices are insane.  Heck, my last visit to a hospital was nearly twenty years ago, and I remember one charge on my bill fairly clearly:  $35 for a disposable stapler (for stapling my cut ankle shut).  Except that it had presumably been run through an autoclave before being sealed in plastic, there was no difference between this stapler and a five-dollar desk stapler available at the grocery store.  It even said “Swingline” on the side.  And that was when Insurance payment caps had teeth.

My daughter went to a local hospital (a “charity” hospital that does several billion dollars of business every year and profits so well that they have built multi-million dollar, full-service “branch” hospital throughout the area) for an outpatient procedure.  The hospital billed her for the amount the insurance company refused to pay.  Then she received bills from a whole slew of hospital subcontractors.  For nearly a year, she was receiving new bills from companies and individuals she had no idea had been even marginally involved in her procedure.  Some of them didn’t even bother to bill her, but went straight to a collection agency without notifying her that she “owed” them money.

That’s how people go bankrupt and end up homeless due to medical bills.  And before you business apologists start on a rant about high malpractice insurance rates, let me assure you that those rates are high not because of litigation abuse, but because there are an amazing number of truly AWFUL doctors who continue to practice medicine despite having a body count higher than a Jason Statham movie.

And the shame of it is that the ACA doesn’t even address these issues.  Nowhere is reasonable, or even standardized pricing for medical care addressed in any portion of the act that claims in its very title to be all about Affordable Care.  Pharmaceutical and medical technology companies get a pass.  Hospital conglomerates get a pass.  Even the insurance companies get a bone in the guarantee of millions of new customers.

And the problem gets worse because you can’t stop the fiduciary abuses of the entities responsible for making our healthcare system untenable by throwing more money at them. Get a  lot of money and start to learn about vape franchise opportunities. That’s like punishing a schoolyard bully by making all the other kids give him their candy and lunch money.  But that’s what the ACA does.  It makes more money available for drugs that treat almost nothing (and have a laundry list of insane side effects), for hospitals that gut the unwell (then throw the carcass of their accounts to the crows), and for bureaucrats, both public and private, who have no other honest means of making a buck.

Call it the ACA.  Call it Obamacare.  It doesn’t matter.  It’s abominable, and it needs to be repealed.

As many of you don’t know, I’ve been publishing short stories on a free-to-read website under the pseudonym, “Kyrie Hobson,” since 2004.  Well, on a lark, I collected the best four of those stories into a single volume that is now available on Kindle.  Go buy it.  Or don’t.  Your call.

UpDate:  Forgot to mention that I published the book under my real name, Brett Hainley, and not a pseudonym. 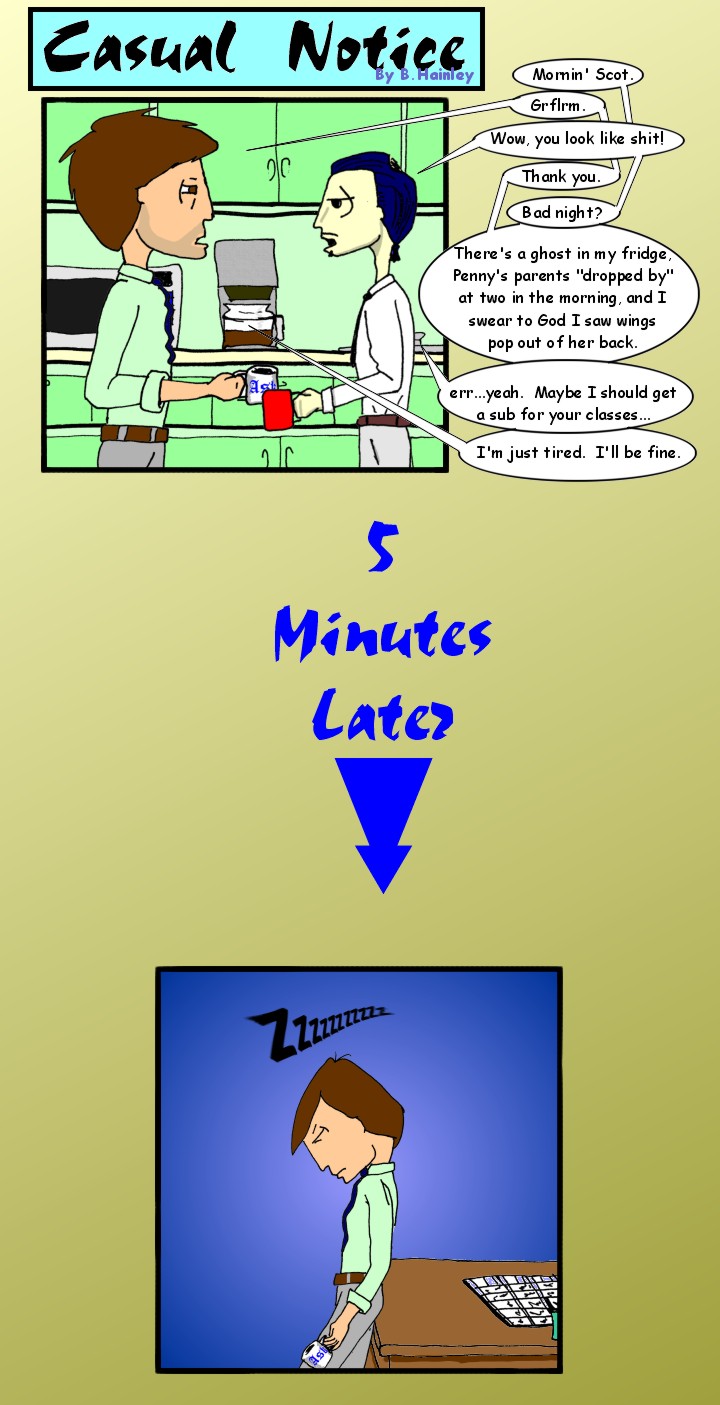 So, another giant head comic.  I’ve decided that it would violate my artistic integrity to “fix” the crappy art in the early comics, so, I’m just going to post them unaltered.  Anyway, other than my bizarre big-head problem at the time, the comic sort of speaks for itself.

Actually, the big head kind of works, under the circumstances. 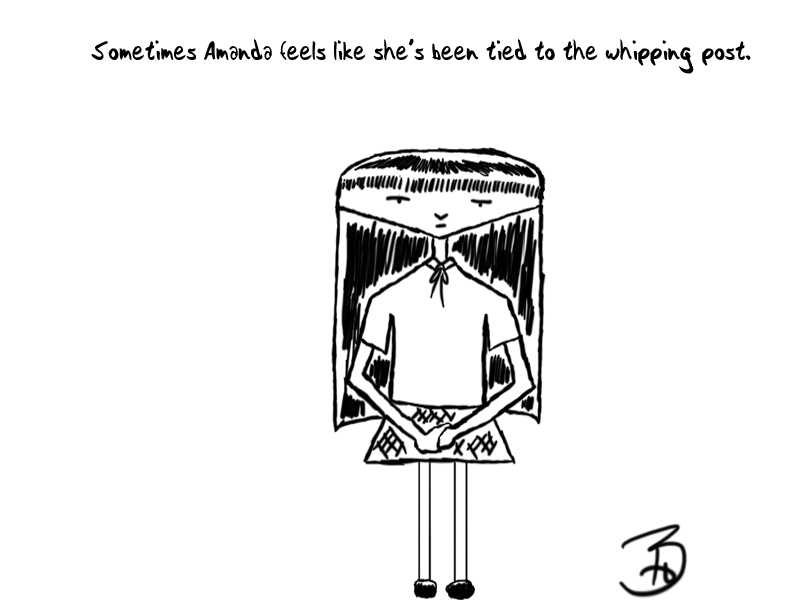