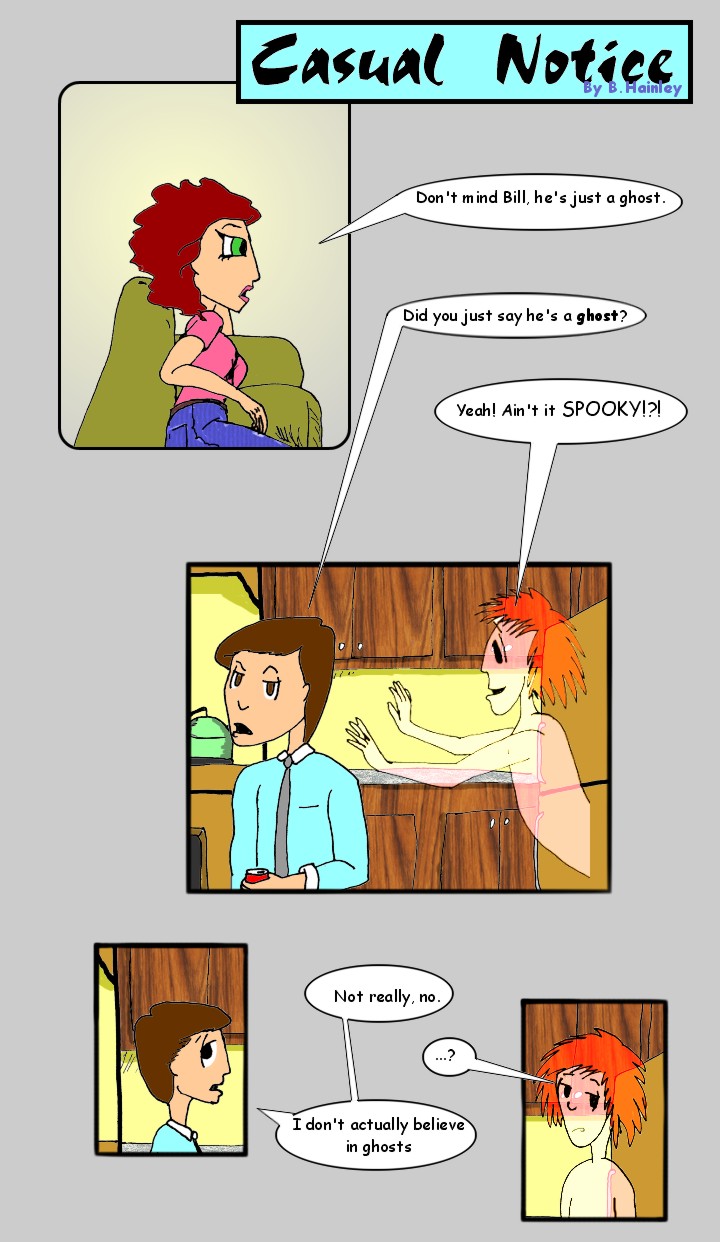 Yeah…lame joke.  Sorry.  Sometimes you just have to fill space with whatever crap dribbles out of your brain. 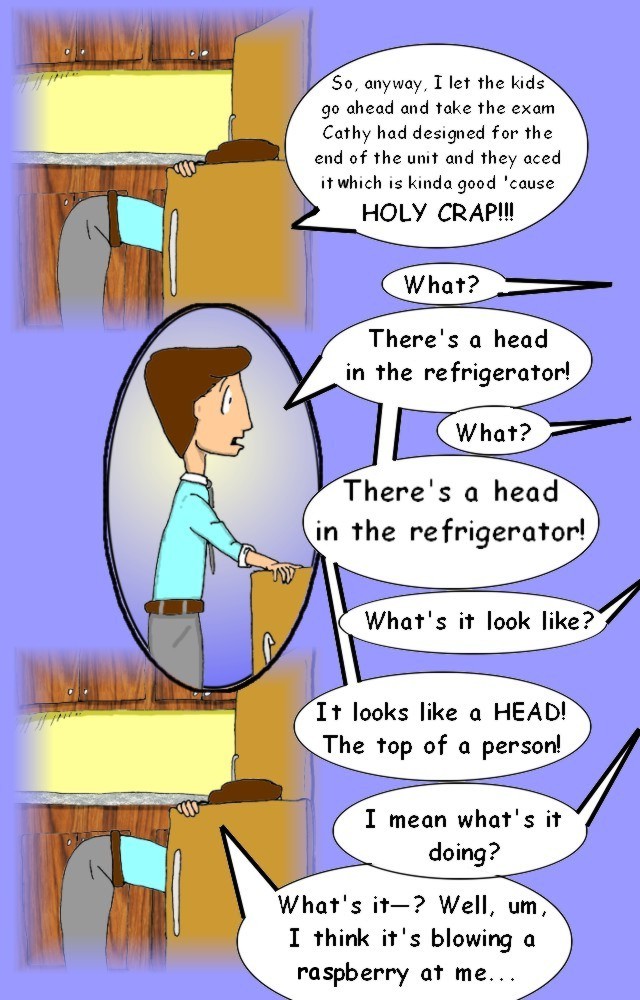 It’s at this point that I started entering the Bobble-head phase of the comic.  For some reason, everyone had giant heads, and sometimes they had insanely large heads (these will be fixed).  this one, it’s noticeable, but not really horrible.  I should point out that part of it was intentional.  I grew up with Family Circus and Tumbleweeds, and any number of other comics where everyone in the strip had insanely large heads, and I was trying to keep up the tradition.  At least that’s what I tell myself when I look at most of these.

This comic begins the introduction of both Dead Bill and Scot’s sneaky suspicion that not everything in the O’Riordan/Davis household was exactly normal.  Despite not being a particularly popular character, Dead Bill was a useful plot device.  Since he floated around the house in a mostly harmless ghostly fashion, he had plenty of opportunities to observe the world and offer a nudge to people who needed one.  This will come up later. 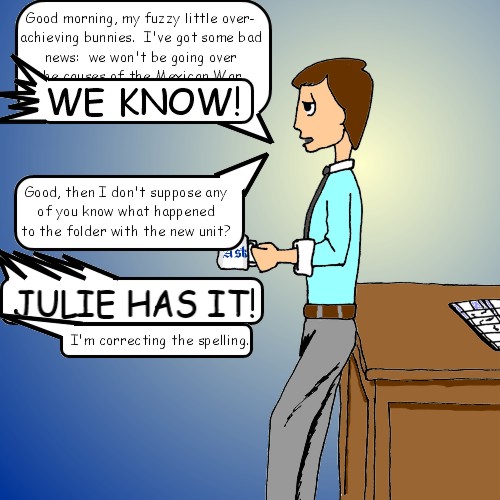 There are a couple of single-panel comics scattered throughout the run of Casual Notice.  They mostly occur when I didn’t have enough action to justify multiple panels, as with this one.  I decided early on that we would never see any of Scot’s students.  A teacher’s relationship with his students is an odd one under the best of circumstances.  In most cases, public school teachers see any given student for one-to-six hours, five days a week, for maybe nine months, if they’re lucky.  That you so often hear of the profound effect that good teachers have on people’s lives speaks more to the insane devotion and skill of good teachers than it does to the potential for damage done by mediocre and bad ones.

Think about it, a teacher’s influence amounts to about 26 days of your life, and that influence is divided between 20 to 40 other people.  So let’s be generous and say that a teacher can reasonably devote a single day to a given student.  Yet some teachers are so good at what they do, or care so much about the students they’re charged with instructing, that that single day shines in the student’s memory for thirty years or more.  It changes the direction of lives, and rewrites history.

Think about that the next time someone bitches about teachers’ unions but doesn’t say a word about the insane salaries paid to upper-level administrators.

Anyway, I decided not to show the students, because I expected the comic to run a few years (it ran five) and I had no intention of letting any of the students become strip regulars.  These were AP kids, and the odds that they would be slouching around school for six years (as in Head of the Class) were pretty slim. 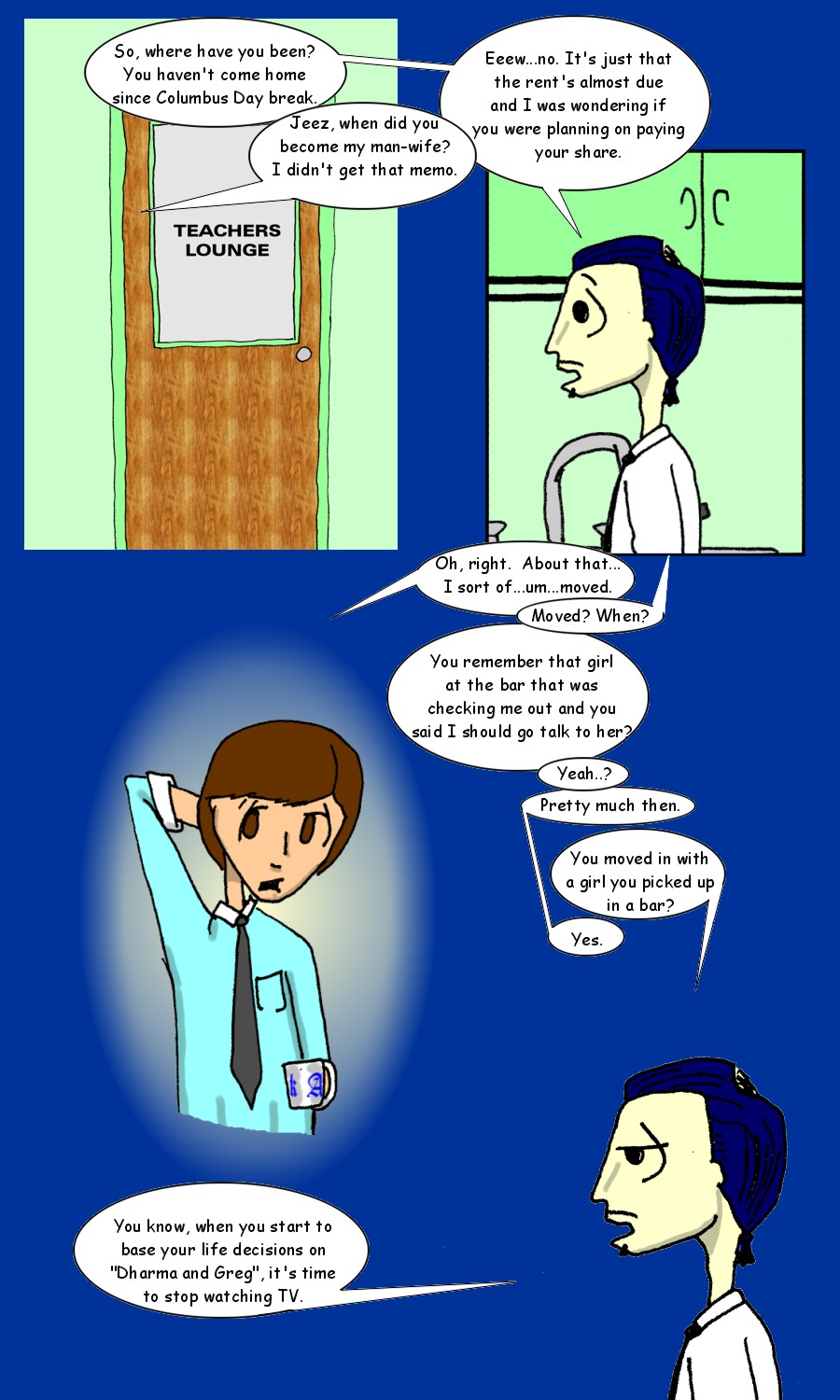 So this is the first story comic, and, in it, we establish that Scot has moved in with Penny, having previously shared an apartment with Steve.  I don’t love the art, and the “Dharma and Greg” joke is dated, but there are worse (in case you were wondering why I didn’t fix it).  Looking at these old comics I have to pick and choose what’s bad but part of my “style” (for want of a better word) at the time and what’s just truly awful.  Believe me, the awful is coming.

This is an idea that has been on my mind for a very long time, if you are interest let me know so we can share ideas and make our routine world an fun and awesome place.

I’ll be honest:  I’m glad that Bradley Manning was acquitted on the charge of Treason.  I’m also glad that he’s going to jail for his irresponsible release of sensitive army files.  He endangered lives and operations; some of the documents he forwarded to Julian Assange included information from which troop placements and movements could have been derived, and that is criminal.  He is not, however, a traitor.  The fact is that no one can be a traitor under US law, because we are not engaged in a declared war.  We have not been in a war since 1945.

“What about Korea and Vietnam?” you ask.  Not wars.  Police actions, the same with every military action taken by American soldiers in the last sixty-eight years.  We’re not even in a military engagement at this time.  Our soldiers are simply occupying territory (a concept that is much more dangerous than actual warfare, since they are subject to attack from unknown quarters).  Just as you can’t be a traitor without a war (or at least a rebellion) you can’t have a war without a Congressional Declaration of War.  Period.

So he’s not a traitor, but I hesitate to call him a whistleblower.  While the data he sent to WikiLeaks did contain a surprising amount of evidence regarding US military abuses that had been handled summarily or swept under the rug, they did not justify the bulk of the classified information he sent.  The military can count themselves lucky that Assange cherry-picked the items that were published in WikiLeaks and didn’t just dump the whole chowder.

Speaking of Assange, by what right is the US pursuing a foreign national living on foreign soil for violating a US law?  I know our government has nursed a few black eyes due to documents published on WL, but tough shit.  Unless the Department of Justice is ready to turn everyone over to North Korea who’s called Kim Jong Un (and his father and grandfather) as crazy as a bag of cats, we don’t really have a leg to stand on (especially in light of recent revelations regarding our own intelligence-gathering activities).

Which, of course, brings us around to the source of those revelations, Edward Snowden.  As I write this, President Obama is in a giant snit about Russia’s decision to grant Snowden provisional asylum.  He even cancelled a summit meeting with Russian president Vladimir Putin.  Now, if you’re old enough to remember the Fall of the Berlin Wall, I want you to pause and think about this a moment.  Did you even in your life conceive of a time when an American President would cancel a meeting with a Russian President because the Russians refused to deliver an American dissident for prosecution?  If you were born on the day the Soviet Army upheld the popular mandate that the Supreme Soviet had tried to ignore, you could not rent a car on the day that our President gave the late Leonid Brezhnev a run for his dissidence-suppressing money.

And if it was only Snowden, who, admittedly released a lot of classified information, that would be bad enough.  President Obama—the man who, on the day before his inauguration, swore that his Administration would be the most transparent in decades—has passed his entire Presidency pursuing and discrediting whistleblowers of all sorts.  The ink was barely dry on his Oath of Office, when Obama’s administration summarily fired Inspector General Gerald Walpin for doing his job (investigating and ensuring the prosecution of an Obama crony who was mishandling government grant funds in hilarious ways).

The Obama Administration has prosecuted more people for violations of the 1917 Espionage Act (the law that makes leaks of classified and sensitive government information illegal) than all other previous administrations combined.  This while openly and arrogantly violating the Constitution (by murdering American citizens without due process), international law (the insertion of the Stuxnet virus into Iranian computer systems comes immediately to mind) and plain common sense (“I could have been Trayvon”  really, Mr. President?  Did you forget your oath to uphold the Constitution, including its provisions regarding a fair and just trial?).  This, then, is the “new dedication to transparency.”

I have friends who are afraid that Obama is turning America into a Soviet-Style Socialist state.  I don’t have such high hopes.  President Obama has already turned the White House into a Chicago Ward Office.  Any day now, the text on the Great Seal will be changed from “E Pluribus Unum” to “Snitches get Stitches.”