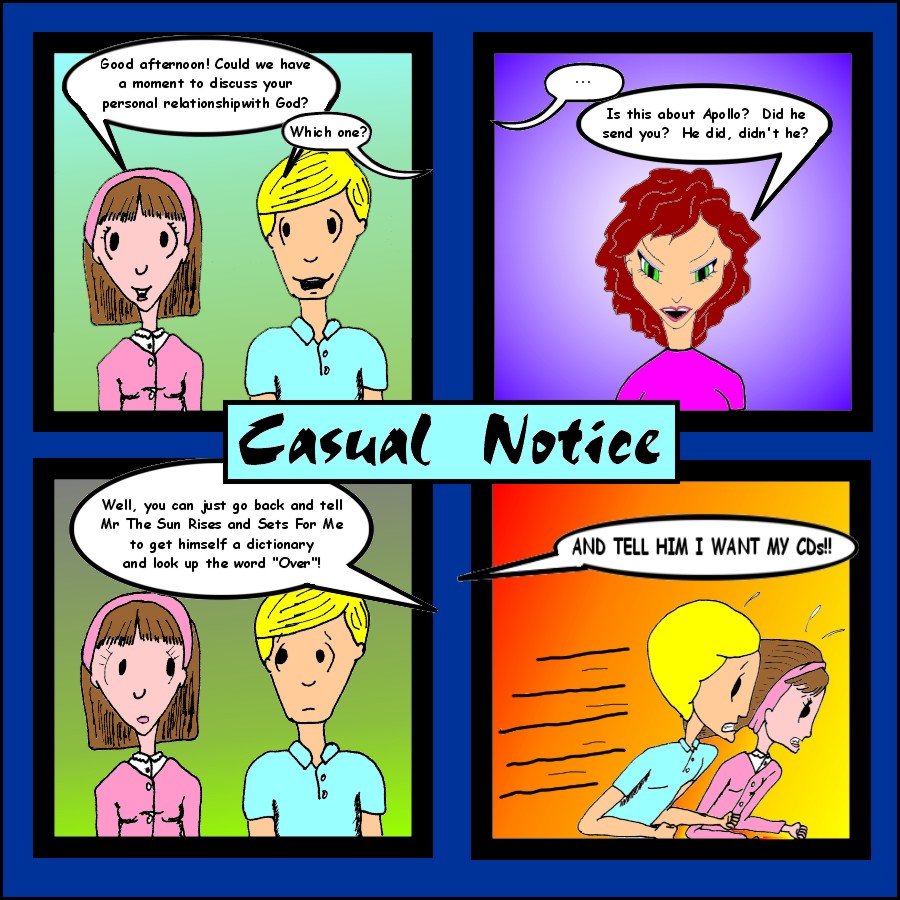 So while a few people are getting their tights in a wad about race, I think it’s time to open the real discussion in the Trayvon Martin case:  Why did the media repeatedly and continuously misrepresent and manipulate the facts in the George Zimmerman self-defense trial?

Why did NBC and other news outlets edit the portion of the Zimmerman police dispatch call so, instead of the dispatcher asking him what race the suspect was (and Zimmerman giving a how-should-I-know pause then saying, “He looks black.”)

Why has no one in the media mentioned that gated communities, like the Retreats at Twin Lakes, do not have public thoroughfares. You can’t put a gate across a public road.  The streets and common walkways are owned and maintained by the community, and yes, that makes them private property.  Martin was a guest of a community resident, which allowed him certain, limited access to community amenities, but he was not “gunned down on a public street” as has been presented.

Why do the media keep presenting a picture of a 12- or 13-year-old Martin and not a more recent picture?  Admittedly, he still has a baby face in the more recent photos, but positioning a posed photo of a twelve-year-old next to a mug shot is just manipulative.

A young man is dead, and another young man (Zimmerman was only 29) will probably never get his life back.  I’m not going to stir the pot on guilty or not.  I just want to know why the media ginned up a tragic story into a national nightmare of misrepresentation?

PS:  As a balance, Fox, Hannity, whoever else, please stop muddying the waters with your info that Skittles and Arizona Tea are two of the ingredients in some bizarre cheapass high school drug.  Who gives a shit?  If he was planning to make the crap (and I’m not saying he was, if the stuff exists), it still has no immediate bearing on the case.

Starting today, Fridays here will be known as Casual Friday. I’ll be reposting the old Casual Notice comics, one per Friday, with commentary. Depending on my mood, I may redraw one or two of the more horrifying ones, and I may even fill in some of the gaps where I went on unexplained hiatus (the explanation is I’m lazy).

So, above, you see the very first Casual Notice comic. A lot of people (who mostly exist in my head and nowhere else) ask me how I came up with Casual Notice as a title. I started using CN as a handle on forums and chat boxes (remember when websites had chat boxes?) back when Avalon High went on its long hiatus. People were bitching on the chat box there about the author’s disappearance, and I registered as CasualNotice to remark that unless they had specific information that his life was hunky-dory they didn’t know that he wasn’t facing some sort of crisis. I kind of liked the idea of being a person who just remarked on things I’ve noted in passing, so I kept the handle and used it for other forums.

As far as the comic goes, the concept expanded from there.  I knew I couldn’t maintain a comic that had a point, so I decided from the getgo, that it would be a slice of life comic, and any commentary would be merely in passing.  Originally, the comic was to be about Scot living with Schmookie (in human form) and not discovering that she was a dragon until much later in the comic.  The bestiality aspect of that gave me issues, so, instead, I had a small family that I’d created for a series of unpublished short stories, and decided to start with the family’s daughter (Penelope) as Scots roommate/love interest.

This first comic, of course, came from the Houston Chronicle’s decision to rename its Houston section with a graphic of a star.  The idea of the Print media trying to compete with electronic media has always been hilarious to me.  What print media used to do very well, better than any instantaneous medium ever could, was edit, vet and fact-check their stories.  If they’d stuck with that and highlighted it’s value, newspapers and magazines wouldn’t be in the crisis that they are.  Of course, they decided they needed to compete with electronic media in an arena where they couldn’t hope to even show up for the fight (hipness), and you have the situation you have now.

To be fair, the Chronicle did finally add the word “Star” to the banner of its “Star” section, so this joke is a little dated.  The cat and the bird will not appear again until Hurricane Ike blows through town.

So while the Hunt for Edward Snowden continues and our attention is drawn toward the hand-wringing that some clerk in the Pentagon Basement (probably an Air Force Staff Sergeant, because they’re as common as field mice and not really needed for combat operations) has the ability to monitor how many times we alt-tabbed between a YouTube Bubblegum Pop playlist and dirtyninjasintrouble.com, we’re forgetting something.  And that something is kind of important, because it goes to the root of the invasion of privacy and the decimation of civil rights in a more direct way than any traffic light camera.

Remember in April, when we’d never heard of any of this Project Prism noise?  The first time the news reported that maybe the administration might be poking into things it shouldn’t be?  If you’ve forgotten (and believe me, it’s easy to forget, when compared to the possibility that the NSA has access to phone logs showing you’ve spent more time talking to the Bengali girl with the fluid voice than is proper for a normal customer service call), I’ll remind you.  In April, a Fox reporter claimed that the FBI had used a questionable warrant to subpoena all of his telecommunications activity.  At about the same time, the Associated Press reported that the feds had done the same thing to almost all of their senior staff.

Why is this so bad?  Well it goes to the Freedom of the Press clause of the First Amendment to the Constitution.  There are two reasons (besides actual criminal investigation–which has been shown to not be the case) why a federal agency might want to tap the phone lines and access the logs of a news reporter or agency.  The first, and this probably applies to the Fox reporter, is probably a simple effort to discredit the reporter.  Given that Fox News seems to be widely viewed as little more than a tabloid on video, that might, on the face of it, make a lot of sense.

Except that our whole view of Freedom of the Press is based on a single lawsuit between a politician and a publisher who made Fox News look like the Wall Street Journal.  In 1733, John Peter Zenger published his New York Weekly Journal with the express purpose of trashing William Cosby, the appointed royal governor of New York.  He did a masterful job of it (Cosby made this easy by being a complete douchebag), so masterful, in fact, that Cosby brought him up on charges of seditious libel.  Arguing directly to the jury at trial (the judge had proven himself to be a Cosby sock-puppet), defending attorney Alexander Hamilton showed that almost all of what Zenger had printed was demonstrably true in its factual bases (if somewhat extravagant in its interpretation).  The jury found Zenger not guilty, and established the American principal of Freedom of the Press.

Essentially, we have Freedom of the Press because, in the United States, we believe the Press has the right and the duty to inform the populace of the activities, good or bad of the government.  For this reason, Rachel Madow can say that a new bill is designed to save our children while Sean Hannity can say the same bill is designed to pick our pockets and hand it over to drug-addicted welfare cheats, and they are both legally entitled to do so, as long as, at some point, they report the actual reading of the bill.  So, while one may not agree with the interpretation of the facts, it is questionable for the government to use its power to undermine the validity of those facts.

What is even more dangerous, and clearly shown in the AP taps, is that the feds aren’t just trying to undermine credibility, but are, in fact, attempting to undermine the Press’s ability to gather facts at all.  There is only one reason to tap the communications of an entire organization, and that is to get around the Constitutional and legal protections afforded to reporters and their access to sources.  Reporters go to jail on principle all the time, protecting the confidentiality of their sources, and most of the time, this principle is held up on appeal.  Through the AP and Fox taps, the FBI can avoid that mess by finding and going after those confidential sources directly.  These are usually whistle-blowers who, acting out of love of their country and their liberties, report wrong-doing by the government so it can be stopped.  They trust the reporters to maintain their anonymity until such time as the point is moot, and the reporters trust in the inviolability of the First Amendment to keep federal agencies from punishing these brave men and women for doing the right thing.

The communications taps disclosed in April undermine that faith and trust to astounding levels.  It creates the sort of environment you expect to see only in an episode of The X-Files, where good people are harassed and harangued, having their lives destroyed or even ended, because some tinpot martinet didn’t want it disclosed that the State Department spent over $300,000 to boost its Facebook friend count.

That’s the danger.  We depend on our news sources to accurately report on what our government is doing behind closed doors.  They depend on confidential informants to open windows into those smoke-filled rooms.  We can’t allow the government to act in darkness, because, as I’ve said before, government is a treacherous servant.  The lights must always be on and the windows open, or we allow liberty’s torch to be extinguished.

I wrote a guest script for Webcomic Pete.  It’s an interesting comic with art that’s reminiscent of some of the single-panel comics from National Lampoon in the 70’s and 80’s.  You should go give it a look.

If you’re just coming here from there, welcome!  Updates are erratic at the moment, but I’m trying to arrange things so I have a more stable schedule.