Preheat your oven to 375° (F). In a smallish bowl mix the flour, oatmeal, salt, and baking soda. Set aside.

Whip the butter to make sure it’s uniformly soft. blend in the eggs, one at a time. Add the brown sugar, sugar, and vanilla, and blend them in until smooth. Slowly add the dry mix. Add the berries (I use a premix called “Berries and Golden Raisins” available at Wal-Mart, it has a good balance of cherries, cranberries, and golden raisins).

Roll the dough into balls about 1 tablespoon each, and bake on a cookie sheet for 8 – 10 minutes. Cool on a cooling rack for 4-5 minutes. Makes 0 – 50 cookies depending on how generous you are and whether your spouse comes into the kitchen when you’re distracted.

Protip: moisten you hands with clean water to keep cookie dough from sticking to your fingers.

After years of my daughter bugging me for the recipe, I’ve finally decided to share it with the world.

In a large, salt-glazed bowl, combine meat, onion, peppers, eggs, salt pepper, Tibetan saffron, 8oz puree, and 1/4 cup bread crumbs. Fold gently facing the nearest ley line intersection (if that information is not available, facing a major landmark of religious or historical significance will have to do) until thoroughly mixed.

Slice into 1cm slices at a 62 degree horizontal and a 93 degree pitch.

Serve with powdered potatoes and MD 20/20.

Filling
Preheat oven to 350º. Insert baking cup into muffin tin. Mix ingredients for crust until crumbly (but will stick together if pressed). Press crust into the bottom of baking cups.
Further soften cream cheese by hitting it with a blender for a few minutes. Add other ingredients and mix until creamy. Spoon into cups on top of crust. Bake at 350º until firm (about 25 minutes). Stick into refrigerator to set for at least 8 hours. Makes about 18 tiny cheesecakes, maybe more; it depends on how generous you are. 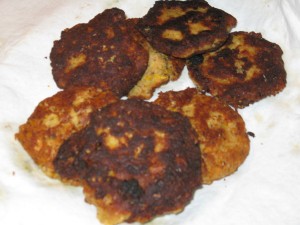