Here’s the deal: If you’re a liberal (and, if you’re still talking to me after last Christmas, it’s almost certain that you are), everything you’ve said or thought about conservatives and climate change is probably a load of crap. There are exactly zero conservatives with IQs high enough to need two hands to count that believe the climate isn’t changing. Of course, the climate is changing, that’s the cost of living in a dynamic system…you know, the sort of system capable of supporting life. 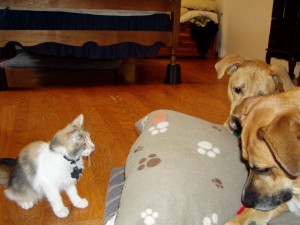 What many conservatives do question is the assertion that humans primarily (or humans alone) are responsible for all climate-change trends. It’s a gross over-simplification to say that we deny the evidence before our eyes, but it goes a long way to make conservatives look like dumbasses while doing nothing to support you assertion. And make no mistake, it is your assertion that must be supported, because the rules of debate say that, since you can’t prove a negative, the positive assertion is the argument that must self-verify.

But, of course, there’s 97% (or 85% or 162% depending on who you ask) consensus that climate change is real and it’s all our fault! Yeah, but that’s consensus among climatologists, people who have a vested interest in promoting the hypothesis of HCCC and developing means of countering it. If that is a valid and final statement of proof, then the fact that at least 90% of theologians agree that the Universe is shepherded by an omnipotent, omniscient god means that the debate is over; there is a god and he is pissed at all of the atheists out there. I mean, these guys are the recognized experts, right?

See the thing about climate change is that the climate is huge. The earth is huge. Think of the biggest thing you can. I have safe money that it is too small to see while you’re still in breathable atmosphere. By the time you’re far enough out to see the earth in a single view, all but the hugest parts of the landscape are rendered insignificant. Mount Everest? Part of a wrinkle in the spot where India is humping Asia. Manhattan Island? too small to see; that’s Long Island poking off the southeastern tip of New York (and even that disappears in deep space photos). Depending on your screen size and resolution, you probably can’t even see Hawaii. 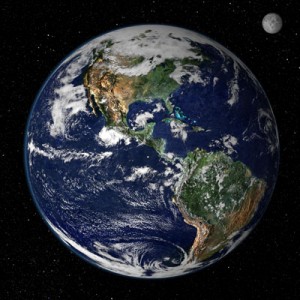 “I can see my house from up here!
Wait…did I leave the back door open?”

When you have a huge system like the earth’s climate, you have multiple gigantic influences that must be calculated just to get an idea of what’s driving it. You have the sun’s radiation, the atmosphere’s ability to trap or release that energy, the oceans and their ability to trap various gases (and heat), the continents and their albedo, even the constantly-changing cloud-cover of the earth has an influence on how much radiation we absorb and retain, and, yes, to a certain extent, you have the influence of industrialized society. How big or how small that influence is, and how much it pertains to current changes has yet to be determined.

I can say it has yet to be determined because we still haven’t determined the full effect of the other influences. The sun heats the earth, but the sun is remarkably unreliable in its output, because it’s an explosion, one on so vast a scale that we can barely comprehend it, but yeah, 4 billion years ago a bunch of volatile gases collapsed on a point and we’re living in the ignition phase of the inevitable combustion of those gases.

The truth is, human influence on the climate is probably not all that great. We could have as much influence as the bug you ran over yesterday had on your driving, or it could be something insidious like a ridge in the pavement that, over time forces your car partially into another lane. The only thing that’s for sure is that constantly screaming, “The climate is changing! The climate is changing!” Isn’t even a little useful. Saying that the climate is changing is like telling a swimmer that water is wet. It’s true, but it does nothing to help him avoid drowning.